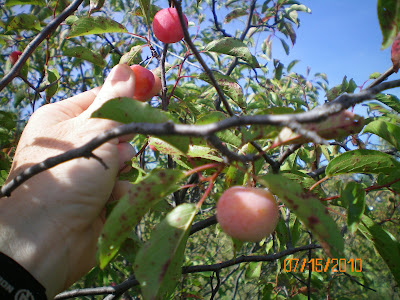 By Chelsa
When we moved out in the country 6 years ago, I was so excited to discover that we had wild plums growing near the tank! These are little tart plums that make your lips pucker and taste terrible if you eat them straight off the tree, but makes fabulous jelly. My boys think so, they say it is the best jelly in the whole world. Granjan always makes lots of wild plum jelly and gives it as Christmas gifts every year. I think it is so rewarding to be able to make things off of your own land and to share that with others. We want to be able to make enough to share too. The last 2 years we haven't gotten any plums because of late spring freezes, but this year the little bushes were loaded. We took advantage of our bounty and picked plums several different times. After it was all said and done, we all worked together to make 99 jars of it! That's right, you can count them in the picture below if you don't believe me. Two jars are missing because we've used up 2 of them already! :o)
Here's the directions if you would like to try a hand at making some yourself sometime. It sure is worth the work. Yum-my! 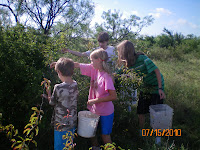 1. Gather buckets, baskets, and your best helpers and go to the plum thicket.
2. Give everyone their own bucket and start pickin'. Go as fast as you can. Don't worry about picking off the stems, you can do that later in the house where it's cool.
3. Don't just pick the ripe ones. Pick some of the greener ones too; they have more pectin in them which aids in the jelling process.
4. Have a contest to see who can pick the most plums. 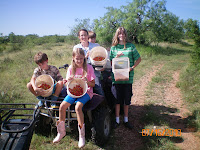 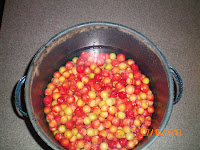 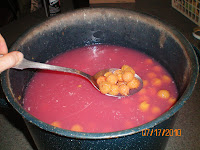 5. When your 'plum' tired of pickin', take your 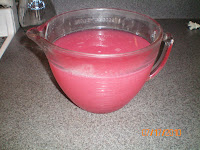 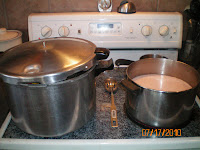 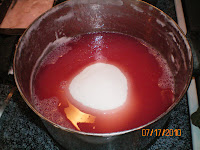 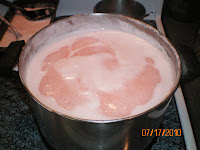 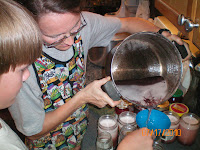 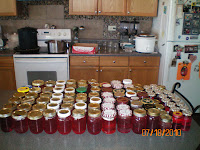 buckets and go home.
6. At home, wash and stem the plums then put them in a big pot.
7. Fill the pot with water where the water just barely covers the plums.
8. Boil plums for 2-3 minutes, take off the burner and let it sit overnight on the stove top.
9. In the morning, strain off the juice and put in another big container.
10. To make jelly you will need jars, lids, 2 big pots: one to sterilize the jars and one to cook the jelly in, jar lifter, funnel, sugar and plum juice.
11. Sterilize the jars and lids in one big pot
12. In the other pot pour 5 cups plum juice and 10 cups sugar. Don't worry about or pay any attention to the ghastly amount of sugar you just put in there. All that sugar is there for a reason. Stir well.
13. Turn burner on med-high and boil syrup mixture until thickened. WARNING!!! Don't take your eyes off of that pot for a second! That stuff will boil over in a heartbeat and then what a mess you'll have to clean up. I bet I had to clean that up 5 different times! ARG!!!
14. Leave jelly in the pot until the foam settles.
15. Pour in sterilized jars using the funnel.
16. Screw on lids and label when cooled.
17. Open one of the jars, lather the jelly on a buttery piece of toast, and enjoy!!!
Posted by Creg Istre Family at 3:09 PM