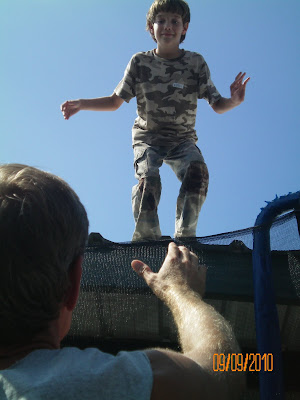 By Creg
Not long ago we were at a swimming pool with some friends playing with our kids. I noticed a father & son playing by the side of the pool in the 5 ft area. The father could stand up but it was too deep for the kid. The father would stand with outstretched arms & tell his son to jump & he'd catch him. Sometimes he would, but a few times he wouldn't. The dad thought it was funny, but the son sure didn't. I wonder if that son will be able to take his father at his word when he gets older.
John chapter 4 tells of a remarkable story of faith shown by taking Jesus at his word.

46Once more he (Jesus) visited Cana in Galilee, where he had turned the water into wine. And there was a certain royal official whose son lay sick at Capernaum. 47When this man heard that Jesus had arrived in Galilee from Judea, he went to him and begged him to come and heal his son, who was close to death.

Why did this official walk a days journey all the way to Cana? So he could bring Jesus back with him to Capernaum.

49The royal official said, "Sir, come down before my child dies."

Evidently this official has heard enough about Jesus to know that when He is in the room, good things happen. When He touches the sick, illnesses leave. His hand over the eyes, and sight is restored. The royal official is on a mission to bring Jesus back to his place so the master's touch could bring health to his boy.

50Jesus replied, "You may go. Your son will live." The man took Jesus at his word and departed.

.
He didn't get what he came for. He left without taking Jesus with him! Was he taking a huge risk? After all, it was his son's life that was at stake. What do you imagine he was thinking on the long journey home? "If this doesn't work out, I'm in big trouble." His family was expecting to see two people come over the horizon, not one. This man had heard enough about Jesus to trust Him with his son's life. What faith! Have you heard enough about Jesus to trust Him with your life? Not just for salvation when you die, but for a life while you're alive. Don't our actions show where our faith really is?
But the royal official didn't have to wonder for long.

51While he was still on the way, his servants met him with the news that his boy was living. 52When he inquired as to the time when his son got better, they said to him, "The fever left him yesterday at the seventh hour."

53Then the father realized that this was the exact time at which Jesus had said to him, "Your son will live." So he and all his household believed.

Who did his household believe? Jesus didn't come with him. It had to be the royal official. The father's testimony led his whole family to faith in Jesus. Isn't that how it's supposed to work? The father's words & actions show his family the true nature of God, that He is faithful & trustworthy to keep His promises. Then they use the father's faith as a springboard to their own.
Posted by Creg Istre Family at 9:30 PM

Email ThisBlogThis!Share to TwitterShare to FacebookShare to Pinterest
Labels: Jesus, Living by faith