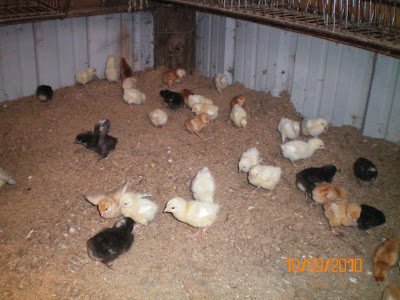 By Chelsa
The last couple of weeks our family has had the privilege of hosting Farm Day at our place. This has been a new and fun adventure for us. A while back, we received a call from a friend of ours asking if she could bring her preschool kids out to our farm to have a tour sometime. So last Wednesday morning we braved 15 four year olds and 10 moms as they toured our farm and did some hands on "helping." The morning was full of all sorts of fun and educational things. First, they watched a goat milking demonstration, then held baby chicks, petted rabbits, got up close & personal while feeding the sheep and goats, played with the baby goats, gathered eggs from the chicken's nesting boxes, rode the horse if they wanted, planted garlic in the garden, made their own personal pizzas and watched us bake them in our homemade outdoor earth oven, played at the tree house, played with our kitties, and ate their pizzas in the back yard for a picnic lunch. We all had a great time. I think they liked it, too.
The next Monday we got an unexpected call from another friend who is Headmaster of a local private school. The teachers had planned a trip to the May Farm that morning, but Mrs. May called in sick. So he called us that morning asking if they could come out to our farm instead. Monday mornings are busy for us because we prepare and take a meal to Faithworks and In-Focus Digital and I make and bake lots of whole wheat pitas from scratch. But we worked it out so they could come anyway. Creg and 3 of the kids stayed and led the tour, while Sterling and I left about halfway through and delivered the food. Because we had such late notice, they didn't get to watch me milk the goat, but it worked out perfectly for them to watch the bread making demonstration outside since I had a fire in the earth oven going earlier that morning. We didn't make the pizzas this time because they had packed their lunches. I couldn't do the garden planting with them, but they had a hay ride as Creg pulled his trailer full of bean bags with his Farmall tractor.
As far as we could tell, all the kids had a blast, but I think it was the moms who learned the most. They asked lots of questions. And our family had a good time, too. It was fun working together to pull it all off. This is definitely something we want to do more often.
Posted by Creg Istre Family at 6:13 PM