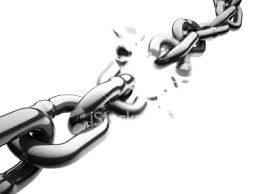 By Creg
The other day I was hanging some wire up for a new clothes line. I had to splice several pieces together to have enough length. While I was stretching the wire it kept breaking in the same spot. I didn't tighten that splice enough. Doesn't everyone know where a chain breaks? At it's weakest link.
If you're pitching to Josh Hamilton you're not going to throw it over the middle, belt high. You're going to try to hit the corner of the strike zone. If you're a football coach & the other team is playing their 3rd string rookie at cornerback, that's where you're going to throw the ball. In war, scouts are sent to spy on the enemy to find their weakness to know where to attack.
John 10:10 Jesus says, "The thief comes only to steal & kill & destroy." Satan comes to destroy your life & he's a good scout, looking for your weakness. After a loss a good coach or military general won't rest until he finds the solution for the weakness that caused the loss. Do you know what your weakness is? What are you doing to fortify it? I know what mine is & Satan's been after it.
Posted by Creg Istre Family at 9:31 AM