We've Never Done That Before 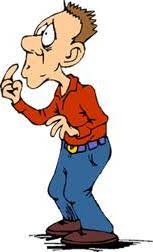 By Creg
Once middle school athletes have been to 2 track meets, they're experts. However, when we would go to a meet that ran events in the "wrong" order, they would start asking, "We've never done that before. Can they do that?" Have you ever had trouble with belief or doctrine just because you haven't seen something before? There's a story in Mark 8 that could give us a lesson or two.

22They came to Bethsaida, and some people brought a blind man and begged Jesus to touch him. 23He took the blind man by the hand and led him outside the village. When he had spit on the man's eyes and put his hands on him, Jesus asked, "Do you see anything?"

Notice why they brought the blind man to Jesus; "to touch him." They knew that when Jesus laid His hands on people good things happened. But that's not what Jesus did. He spit on him. After they "begged" Jesus to touch him, Jesus cleared His throat, puckered His lips & the people cried, "How dare you spit on him, let's go." It's a good thing they didn't base their beliefs on what they've seen or haven't seen. I think we do sometimes. "God can't talk to you like that. He only does it this way." "Visions are just your imagination because I've never had one." "We've never done that in worship before. That's wrong."

24He looked up and said, "I see people; they look like trees walking around." 25Once more Jesus put his hands on the man's eyes. Then his eyes were opened, his sight was restored, and he saw everything clearly.

How did he know what a tree looked like? He probably could see before and Jesus is giving him a second chance at seeing. Isn't that what Jesus is in the business of doing? Getting you back what you lost in the will of God. Jesus came so we could go to heaven, but that's not all. What about right here and right now? To restore us in an intimate relationship with God through the Spirit so we can learn what it means to live all of life under the reign of God. In John 10:10 Jesus says;

I have come that they may have life, and have it to the full.

Was it ok with Jesus for the man to see people as trees? No, Jesus could've said, "That's better than you were before." Jesus wants us to see as clearly as we were created to see, especially spiritually. Some of us spend our whole Christian lives seeing people as trees. Seeing sinners and problems instead of opportunities. When you stop at an intersection that cardboard sign has a face above it, made in the image of God.