A Spiritual Lesson from Skye's adventure

After writing the last blog about Skye's disappearance I have been thinking about parents & their kids.

Let's say I was having a conversation with someone who knows a little about dogs. Pretend I told them that we were going to put our very valuable dog, who had no name tag, in a small horse trailer that was not totally enclosed and drive 10 miles down country roads in the dark. What do you think they would have said?

"That's not safe." "The dog might jump out." "No one will know her identity." "You're taking a big risk" "If she does get out, you'll probably never find her." "You need to make sure she's protected." "There could be dangerous things out there." "She doesn't know enough to keep herself out of trouble." "You don't know much about keeping dogs safe."

And they would be exactly right. The best situation for a young dog is in a protected place with her trainer: watching, learning, playing & being loved. Not in strange places full of unexpected trials for which she has not been prepared.

But don't a lot of parents put their very own children in similar situations? Places where they can easily jump ship. Without an identity they truly believe in. Where they are without guidance in a unfamiliar place. How can they make good decisions in those circumstances?

Don't parents often put their kids in places where they meet dangers & temptations that they are not ready for spiritually? That could be going to school all day with kids & teachers who have a different worldview; so the parents don't know what their kids are learning & hearing and from whom they're learning & hearing. That could mean going to parties with kids you don't know, watching movies they shouldn't be watching & listening to jokes they shouldn't be listening to. That could mean going to church activities with too many kids & not enough parents, leading to temptations for which they're not ready.

When those situations are discussed does anyone say; "That's not safe." "You're taking a big risk." "You need to make sure she's protected." "There could be dangerous things out there." "She doesn't know enough to keep herself out of trouble." "You don't know much about keeping kids safe."?

Parents do those things thinking they're doing good because every other parent is doing it.

Can you think of a worse learning situation for a child than constantly being with a group of peers who have the same immaturity, temptations & struggles? Or in strange places full of unexpected trials for which they have not been prepared.

Isn't the best spiritual situation for a child to be watching, learning, playing & being loved with/by their parents (or other mature Christians) who believe Jesus is Lord? .
Posted by Creg Istre Family at 12:41 PM No comments: 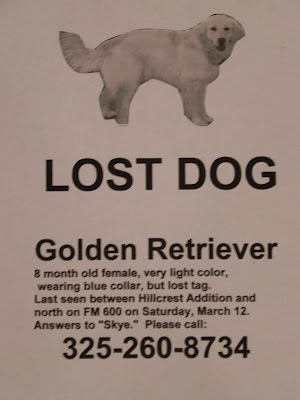 It's always a good day when the lost get found.

Sierra's 8 month old pure bred golden retriever jumped out of the back of our horse trailer one night when we were taking her to our house from my mom's house. I realize now that I should have noticed the height of the doors related to Skye's size and jumping ability and let her ride with us in the van. But I didn't. We discovered she was missing after driving the 9.2 mile trip. Most of those miles are farm country. She could be anywhere without anyone knowing it!

To compound our anxiety, Skye had broken off her dog tag & it hadn't been replaced. So even if some nice person does find her they won't know who to call. Our chances of getting her back are sinking exponentially.

Three days later (after putting up flyers everywhere we could think of) my dad is reading the newspaper and sees an ad in the classified section, "Found Dog, call this #." Praise God it was ours! A nice lady found Skye and welcomed the strange dog into her house. She had three other dogs to play with in the house and it looked like she got all she wanted to eat. What fun. What we had been imagining as a canine horror movie turned out to be a four day, three night vacation complete with carpet playroom, furnished friends, never-ending buffet and air conditioning.

I think we'll take that nice lady a key lime pie.
Posted by Creg Istre Family at 9:21 PM No comments:

By Creg
Last week Sierra, Sterling, Samantha and I drove to Lubbock to see a lady about a horse. We had talked to her on the phone and asked a bunch of questions to make sure the horse would be a good fit for Sierra. She assured us he was calm, obedient, gentle and would make a great horse for a beginner. She said he was her personal horse and the last one for sale. While she hated to get rid of him she would sell him to the right family. Since he was a beautiful paint horse with a reasonable price we drove the 5 1/2 hour round trip with the horse trailer intending to bring him back home. However, as we took turns riding the horse it was clear that the lady didn't tell us the truth. The horse went whichever direction it wanted, stopped when it wanted and trotted when it wanted. None of us could control the horse, including her. Not good. The more this went on the more defensive the lady became and her excuses explaining her horse's behavior became real creative. After about 20 minutes I could tell she felt humiliated. So we drove back home feeling tricked. I'm guessing she deceived us hoping that her horse might do good enough to fool us. Thinking that we might not notice its disobedient and stubborn nature and then she could get rid of it. It wasn't a total waste of time because I got to spend a lot of good quality time with three of my kids, but we were a little disappointed.
The more I thought about the dishonest horse trader, the more I realized that I had done that many times before.
I was not trying to deceive customers, becoming defensive while excusing bad behavior and trying to get rid of a horse. But trying to deceive God, becoming defensive while excusing bad behavior and trying to get rid of guilt.
Have you ever done that? Where you try to convince God that things in your life are better than they seem to be. All the while defending dishonest creative excuses. Hoping that the problems you have created will just go away and no one, including God, will notice the truth. Then you can be guilt-free.
While those times we are caught in deception can be humiliating, they can also be motivating and freeing. Then we can finally be honest with ourselves and say, "This is who I am right now, this is who I need to be and I trust God to help me get there." Sometimes it's not what you did or did not do in a certain situation, it's what you are or are not and being honest enough to admit it.
Posted by Creg Istre Family at 8:29 PM No comments: