What I've Overcome
by Fireflight

What do you do when Satan steals your childhood? Break the chains, move forward, overcome? That's easy to say. I have 3 friends who can show you.

Jason was 11 when his mom sent him to the boys ranch. At the age of 29 he was sent to prison for the 1st of 3 times. While in prison he was baptized. After his release he lived with us for several months. Now he's in the process of buying 2 homes to use as recovery houses “to the Glory of God.”

Loyd's brother got him high for the first time when Lloyd was 9. When he was 17 he spent 2 years in prison because of drugs. Upon making parole he became a traveling chef for rock groups on the road. He cooked for KISS, Ted Nugent, VanHalen & Pantera. After 35 yrs of consistent drug use his sister tied him to a bed for 2 weeks to get him sober. He's been clean for 7 years now. When a friend at a narcotics anonymous meeting dared him to go to church, he ended up at Hope. He was baptized after a Tuesday bible study and is a faithful member of God's Kingdom.

When Misty was 7 years old she & a friend started cutting themselves. At 10 she was taken to a children's home. Two years later she was sent to a juvenile detention center. For the next 5 years she was an inmate at the Texas Youth Commission. Twice she violated parole for attempted drug overdose. She was finally released when she was 18. That's when we met her. After almost a year of attending worship at Hope and going to Chelsa's bible study she was born again. (That's her in the picture with Chelsa) 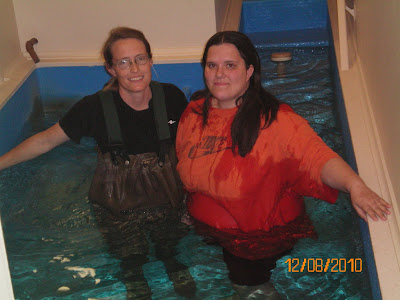 With friends like these, there's no such thing as an enemy.

Email ThisBlogThis!Share to TwitterShare to FacebookShare to Pinterest
Labels: Transformation