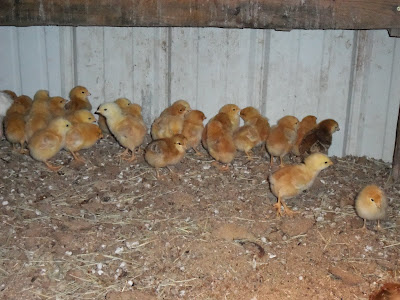 by: Chelsa
We are trying out a new breed of meat bird for our family and friends. In the past we have always used the old standby: the fast growing White Cornish Cross. This is the same chicken found in every grocery store in America. These birds grow incredibly fast, growing up to 5-6 pounds fully dressed in just 8 weeks. That may sound good at first since you only have to feed them for 8 weeks, but after raising several batches of them the last few years we've decided we don't like these birds for several reasons.

First of all, you have to realize that these chicks are very delicate creatures. You can't just put their food out like other chickens. Instead, you have to be extremely careful in feeding them and pay attention to how much they eat. If you don't take their food away each evening and keep it away for 12 hours each night, they can die of a heart attack when they get older. Seriously. You're average chicken doesn't need monitoring at all. They know when to stop eating.

Another reason we don't like these birds is that they don't act like chickens. They remind me more of couch potatoes who sit in front of the tv or computer all day eating snacks. They don't run around and forage for food. No bugs, no table scraps, nothing. Even if we bring the vegetables straight to them and lay them at their feet, they turn up their beaks in disgust. They will only eat the store bought pellets. Period. They just sit by the feeder and eat, then poop, then eat some more. That's it.

But the worst problem of all is the last week and a half before we butcher them. By then they are so fat and so lazy that they don't want to walk when we move their portable chicken pen, which is moved 3 times a day. There is this terrible sinking feeling in the pit of your stomach when you move the pen and find out you accidentally ran over and killed a couple of chickens earlier that morning because they wouldn't move out of the way of the wheels. That's a lot of food and a lot of money down the drain. It's sad. I feel sorry for them. Of course it's not their fault, since they are specifically bred to get big as fast as possible. They're not being the chickens God created them to be. And I don't want to eat a bird like that. You know what they say... You are what you eat!

I'm excited because we received our new breed of chicks in the mail today. These new meat birds are called Freedom Rangers. They also grow big relatively fast, but it takes 10-12 weeks instead of 8. These birds act like real chickens. They forage some for themselves, which means they get some exercise. I'm interested to see how they perform for us. I hope they are hardier than the Cornish Cross.
Posted by Creg Istre Family at 9:28 PM