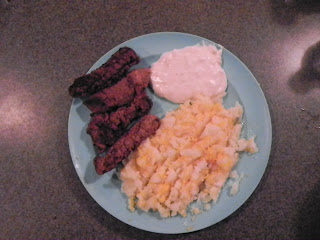 Yesterday afternoon I was coming in the back door to ask about supper. Chelsa had left with a friend to go on a retreat & I had been cutting crosses in the backyard for several hours so the kids had been alone in the house. As I walked in I was immediately hit with an aroma of delicious fried steak fingers. The kids were like an assembly line of disciplined ants. Steele ground the wheat into flour then breaded the steak fingers. Sterling was stirring gravy. Sierra was frying the steak fingers after putting the potatoes in the oven. Samantha was setting the table. It was delicious. And of course some homemade cookies for dessert.

That night the kids were in the boys bedroom telling stories and I was working on a lesson in our bedroom. I noticed it was almost 9:00 so I instinctively called out "get ready for bed." Absorbed in my work, I didn't think about anything else for about 10 minutes. As I got up to remind the kids of bedtime they were all tucking themselves in bed. A few "good nights" later I was back in my room thinking, "Chelsa & I are working our way out of a job."

The next morning we woke up to 24 degrees! I started the fire in the wood burning stove and the kids went to let the animals out of their stalls & give them their morning feed. I didn't even have to get out of my house shoes. When Chelsa gets back I think I'll remind her what a great mother she is.

Did I mention we had chocolate chip pancakes for breakfast?
Posted by Creg Istre Family at 8:06 AM