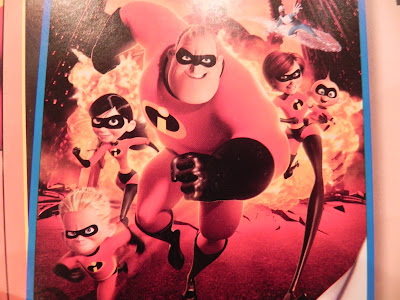 Did you see the part in The Incredibles where Mr. Incredible lifts a car to save someone? I know it's animation but that scene could really happen. I don't mean that someone could look like Mr. Incredible. A 64 inch chest and a 29 inch waste can't happen, but the car lifting thing could.

A recent article in Sports Illustrated told about Rhiannon Hull & her 6 year old son Julian. They were swimming near the beach in Costa Rica on a particular day that would have the greatest changes in tidal waves of the season. It would be very easy to get very deep very quickly. In all likelihood Rhiannon and Julian stepped off a sandy ledge and were swept by the current into open water. In roughly the time it takes to read this sentence, a day at the beach had turned into the ultimate test of endurance. For the next half hour, Rhiannon would fight not just for her life but for Julian's as well. At 5'2" and 100 pounds she had been able to shoulder-press her 45 pound son to get some surfers' attention while treading water. Hysterical strength. As the surfers approached, Rhiannon seemed to shove Julian forward. Julian would recall feeling her hand, under the water, on his foot. One rescuer reached out and snatched Julian. He turned and placed the boy on his surfboard. Julian is safe. They were less than 10 feet away from her, but in the time it took the rescuer to turn back around, Rhiannon had breathed her last breath and vanished into the sea.

You might have heard stories like the one about Nick Harris, the 5'7" 185 pound Kansas man who in 2009 lifted a Mercury sedan off a pinned six-year-old neighbor. Or the one about Lydia Angyiou from northern Quebec, 5 feet tall and 90 pounds, who in '06 wrestled a 700 pound polar bear long enough for her son to escape to safety.

As a group of South African sports scientists recently wrote, "An unusual feature of humans is their ability to produce extraordinary feats of strength (hysterical strength) or inconceivable performances of endurance when the only alternative is to face death." These superhero exploits, the scientists concluded, are the result of the human brain's forcing the body to keep much of its muscle power in reserve unless the power is required to preserve life. The data suggest that our brains ensure that we can never perform our best until the stakes are dire.

Because of the risk of injury or exhaustion, the brain usually does not allow all or even nearly all the body's power or endurance to be used without that life-threatening danger. After lifting the Mercury, Mr. Harris tried to repeat the performance later the same day, he couldn’t. But that one time, with life on the line, "somehow, adrenaline, hand of God, whatever you want to call it-I don't know how I did it," Harris said.

Amazed at the human body? Now think spiritual for a moment. If God put in that strength mechanism for out physical bodies, just think what He has done for our spiritual lives! When Jesus tells us how to live through His teachings, He's not saying, "Here's the instructions, best of luck. Hope you get your life put back together." When Jesus speaks He empowers. The presence & power of the Holy Spirit enables us to live the kingdom life that Jesus invites us into.
Posted by Creg Istre Family at 9:21 PM