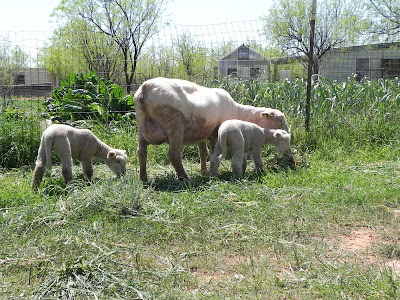 Since our humble beginnings of living life on a farm, we have grown in our knowledge of homesteading by leaps and bounds. We certainly don't claim to know it all. In fact, we have learned a lot of what NOT to do. One of the most recent sore spots is in the area of raising sheep for meat.

We haven't had very much luck with our sheep raising endeavors. When we first decided to raise sheep for meat in 2009, we bought two ewes that summer with the hopes of raising a small herd. But that fall we realized they were too small to breed so we had to wait until the next fall, 2010. In the process of waiting, we bought a young ram to breed with them. Apparently he wasn't ready either because he didn't do his job and the following spring, 2011, we had no babies. This last year the ram still showed no outward signs that he was the least bit interested in our ewes and we thought he must be sterile or something, so this winter with the help of the Hufstedler crew, we butchered him and put him in the freezer. We might as well get some use out of him.

But a few weeks ago Samantha noticed that Fluffy's udder was becoming quite large. Could she be pregnant? No way! That ram never made a move or even a hint of a move in the year and a half we had him. But her udder was growing round. Sierra had read of animals having false pregnancy, where they show signs of being pregnant, but aren't. We thought that might be happening. However, on the morning of March 22, 2012, Sierra found 2 baby lambs in the sheep shelter! We couldn't believe it! Then on the 28th the other sheep, Fleecy, had one! Ugh. I feel kind of sheepish now.
Posted by Creg Istre Family at 12:22 PM