For Christmas this year, instead of the usual gift openings of toys & stuff, my mom came up with the idea that we should each make games that family & friends could play. So we set out designing new games that we thought would be interesting & fun. Some were based on an old game, like candyland or go fish. Some were very unique. They've all been fun to play while spending good family time together. 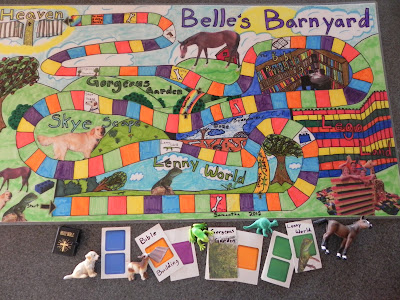 Samantha's game is called "Belle's Barnyard", named after her new filly. You draw a card & move to that color. Some cards have a place on it like "Lenny's World" for Sterling's lizard, "Skye Scape" for Sierra's golden retriever, "Lego Land" for Steele, "Bible Building" for my study, and "Gorgeous Garden" for Chelsa. If you draw one of those cards you go straight to that place for a shortcut or a backward move if you've already passed it. 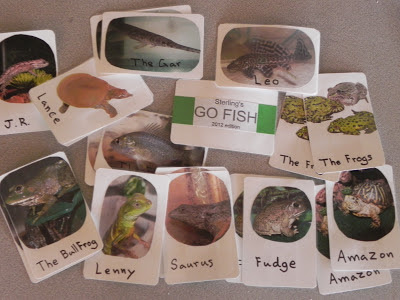 "Go Fish" is the name of Sterling's game. He took pictures of all of his reptiles, amphibians & fish and made playing cards that you try to match while playing "Go Fish." 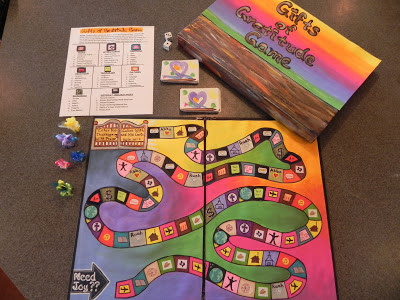 Mom's game is the most unique. The name is "Gifts of Gratitude" and it's based on the book "1,000 Gifts" by Ann Voskamp. (If you haven't read this book buy it now!) First you draw a card from the stack & read the quote that is either from Ann's book  or from the Bible. After elaborating on the quote, if you desire, you then roll the dice & move your game piece (a miniature gift-wrapped box made by Charlotte Felix)  to a square. The picture on the square will direct you to tell of something you're thankful to God for. The categories are people, towns, emotions, education, technology, cultures, economics, difficult circumstances, Jesus, Holy Spirit, God, bible, church, creation, family, country living, food, travel, music, & the human body. Playing this game gives everyone a chance to experience the joy of being able to give thanks to God in every & all situations. You will find that you can express gratitude in the smallest of moments & in the biggest of difficulties. And that pleases God. I think she should write to Ann & get this game published.

My game was based on the TV show "Amazing Race" where teams solve clues & complete tasks in a race of mind & body. We had two teams of three and they had to complete 10 stages of questions, hunting, riddles, bike riding, puzzles, & grouping vacation pictures. Chelsa & I were the officials.

Sierra & Steele are working on a game based on the "Hobbit." They said we need to watch the movie before we play to help us get the questions right.

There is nothing like playing a few fun games while drinking hot chocolate & eating popcorn on a cold winter night.
Posted by Creg Istre Family at 12:03 PM No comments:

By Creg
(This has been adapted from writings by Patrick Mead) 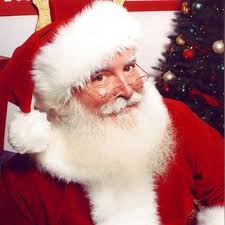 Many different santas with their fake beards & welcoming laps are in our malls & department stores now. Lines of kids form impatiently waiting to speak to their one hope of getting that new ipod or 3D video game. I read recently where a small town used a woman to play Santa for the town hall party. Just unheard of-men should always be Santa because they are far more used to sitting in one place for long periods of time than women are and they’re better at making big promises they have no intention of keeping.
In different cultures across the world people will remake Santa in their image. You’ll see big Santas & little Santas. Tall Santas & short Santas. White Santas & brown Santas. And that’s great. We want Santa to look familiar, the better for him to get to know us so he’ll know what size shirt to get us.

The problem is when we try to remake Jesus in our image, reversing the order of Genesis 1:27. Several years ago, the British Broadcasting Company ran a mini-series on the life of Jesus. There were howls of protest, not because they had gotten the story wrong, but because the actor chosen to play Jesus was short and overweight. They said "Jesus wasn’t short! He wasn’t overweight!" Really? Who says? What if he were? What if Jesus had acne scars, or bad breath, or crooked teeth, or walked with a limp.
One criticism of Jesus was that he was a country hick. The accent Jesus and his apostles had marked them as coming from a part of Judea that was considered a joke by the rest of the nation. They were assumed to be uneducated. Remember how, as soon as they began speaking, they were labeled as "ignorant and unlearned men"? What if you get to heaven and Jesus sounds like Jeff Foxworthy… or Larry the Cable Guy? What if you get to heaven and hear a Yankee accent or a Texas drawl. Maybe he sounds British, “Welcome to heaven you bloody saints.”
You’re not offended are you? Some of us have made an idol of a white American Jesus. Remember this: Jesus looked like an Arab looks today. He would have had the coloring and features that would have singled him out for extra screening at the airport. He might have made you nervous when he sat beside you on the bus. His accent would sound strange to you.
Politicians try to make Jesus be a member of their party, instead of doing the hard thing and trying to be a member of his. Remember the "What would Jesus drive?" advertising campaign of a few years ago? The assumption was that Jesus (always gentle, meek, mild) would want to treat the planet lovingly, with sweetness and care. He would, the commercials left no doubt, drive a Prius or ride a bicycle. Where did we get the idea that Jesus wants to save the planet? Didn’t he tell us, in no uncertain terms, that he was going to destroy it by fire?

I saw a "Who would Jesus bomb?" bumper sticker not long ago. It’s a sarcastic question that implies God is a pacifist. It makes me wonder if those people have ever read the Old Testament. By looking at just a few parables and teachings in the gospels, they have a skewed picture of Jesus. Look at God moving in the Old Testament and in Revelation and you see great swaths of destruction, destroyed cities and cultures, and dead bodies alongside the road. It seems that God IS willing to kill some folk… unless you decide to remake Him in your image.
Most leaders of the emerging church believe that Jesus is a Democrat and a pacifist because they are. Most Republicans think Jesus likes them best. Jesus is not a mascot for our desires, wishes, and dreams.
It is too easy to create new stereotypes of what Jesus looks like. We can see Jesus in the life of Mother Teresa… but can we also see him in the bloodshot eyes of a recovering addict, or the fancy suit of a company CEO, or in the tired face of a third generation welfare mom? 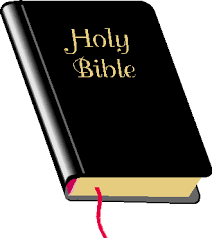 God gave us 66 books to show us His many faceted character. When we make God in our image, or when we localize God to a few gospel stories, we lose the big picture and end up with a white skinned, blue eyed, brown haired Jesus. That was the mistake Jesus’ people made in the first century. They had so many preconceptions concerning how the Messiah would act, sound, and look, that Jesus didn’t measure up and they passed over him, waiting for a better Messiah to come along.
Jesus, in fact, transcends every classification because he is God and Man — both fully. We should quit trying to make him in our image and bow our knees to him so that he can remake us in his.

Posted by Creg Istre Family at 12:54 PM No comments: