By Creg
Is it winter now? Yesterday it was 77 degrees. Today it's below freezing with sleet on the ground. You know what they say about West Texas; "If you don't like the weather, just wait 5 minutes."

Last weekend Chelsa had the second of her herbal medicine workshops. Ten ladies showed up and participated in a 3-hour seminar that included lunch and making their own products to take home. They learned how to make medicinal salves, lip balms, immune boosting tinctures, and a strep throat gargle. I think Chelsa had as much fun preparing for these classes as the ladies did attending them. She has really taken to absorbing all she can learn about the benefits of using herbs. It seems God has given us most of the medicines we need in our own gardens!
Posted by Creg Istre Family at 4:30 PM No comments: 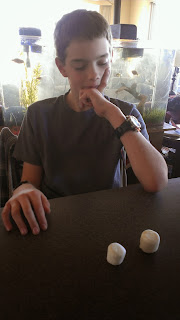 A famous experiment was done in the 1960’s by scientists at Stanford who wanted to test the willpower of a group of 4-yr-olds. The kids were brought into a room & presented with a selection of treats, including marshmallows. They were offered a deal: They could eat one marshmallow right away, or, if they waited a few minutes, they could have two marshmallows. Then the researchers left the room. Some kids gave in to temptation & ate the marshmallow as soon as the adult left. About 30% managed to ignore their urges, & doubled their treats when the researcher came back 15 minutes later. Scientists, who were watching everything from behind a 2-way mirror, kept careful track of which kids had enough self-control to earn the second marshmallow.

Years later, they tracked down many of the study’s participants. By now, they were in high school. The researchers asked about their grades & SAT scores, their ability to maintain friendships, & their capacity to “cope with important problems.” They discovered that the 4-yr-olds who could delay gratification the longest ended up with the best grades & with SAT scores 210 points higher, on average, than everyone else. They were also more popular & fewer did drugs. If you knew how to avoid the temptation of a marshmallow as a preschooler, it seemed, you also knew how to get yourself to class on time & finish your homework once you got older, as well as how to make friends & resist peer pressure. It was as if the marshmallow-ignoring kids had self-regulatory skills that gave them an advantage throughout their lives.

Maybe Jesus knew what he was talking about when he told his followers to deny themselves.
Posted by Creg Istre Family at 2:42 PM No comments: